Share0
Tweet0
Share0
The Razor company is known for making great electric scooters for kids in all age groups. It is not easy to find a kids electric scooter that is sturdy and easy to ride and with decent speed and range. The Razor Black Label E100 has received very positive reviews from customers and it is considered to be one of the best electric scooter for 8 year old's and above. 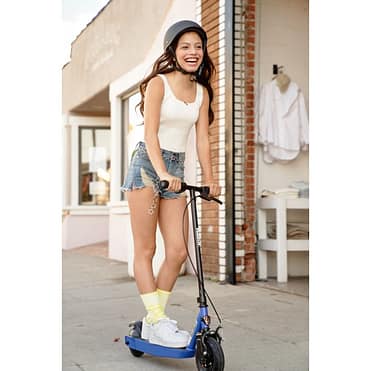 The Razor E100 is very similar to the E90 kids electric scooter with some notable differences. The Razor E100 has also received very positive feedback from customers and there are many factors that make it an ideal little scooter for 8 year old's and older kids to scoot around in.

The 90 Watt motor has Razor power core technology, which means the scooter does not have any chains or belts. The hub motor is maintenance free, which is very important for kids electric scooters.

The top speed of 10 mph is the same as the Razor E90. It is fast enough to make riding fun and exciting but not too fast making it unsafe for kids.

One major difference between those  kids electric scooters is the front pneumatic (air-filled) tire of the E100. This 8-inch air-filled tires makes riding the scooter much smoother than with the urethane front wheel of the E90.

Both scooters have thumb-operated control, which is really simple and intuitive to use. But another difference is the hand-operated front brake, in addition of the rear fender brake for the E100 model. The E90 only had the rear-fender brake, so this upgraded safety feature for the Razor E100 is very useful.

The rear-wheel drive adds lots of traction and greatly improves steering. The fact that the weight is concentrated at the rear means greater stability and control.

The deck of the Razor E100 kids electric scooter is made out of steel and it also has anti-slip tape along the deck for extra grip. This is very useful especially on damp and wet conditions.

The Razor E100 is a little heavier than the E90 e-scooter at 21.5 pounds but the extra couple of pounds is not a significant factor.

The maximum rider weight is also 120 pounds, although heavier kids or teens can also ride the scooter but it most likely voids the warranty.

Overall it is an updated version of the popular Razor E-90 kids electric scooter. 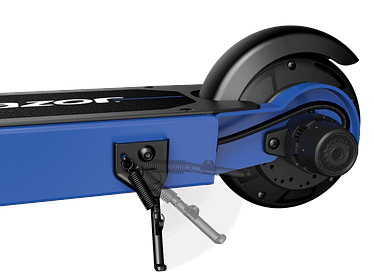 The E100 has received very high overall ratings from many customers. Considering the price it is a fantastic little electric scooter for 8 year old's and older kids as well. It is sturdy, easy to ride, has lots of safety features and looks really cool.

The battery doesn't last very long, which is expected with these kids scooters. But other than a few minor issues, it is great value for money. The major problem is that these kids electric scooters are often out of stock, which makes them hard to get. The kids will surely love to scoot around with this cool scooter.

"My kids have been riding this all over! It charges a bit faster than we expected and they're having so much fun. My 7 yr old and 9 yr old fit great on this scooter and basically it's a competition to see who can get to it first. It's super easy to use, balances well, and is overall a great scooter."

"My son is so happy with his Razor Black Label Scooter. As soon as he saw the box we had to get it together immediately. The instructions that come with the scooter are very easy to read and very helpful. It took less than 10 minutes to put together. The chargers prongs were bent so we had to re-bend back to be able to use the charger.

The scooter is very sturdy and well built. I love that the rear tire makes for a good solid ride. Our driveway is not paved and the scooter still runs really good on it. I also like that it has 2 brakes (front and rear) so my son can have better control of stopping when needed. Very stylish scooter! Highly recommend!"

Take a look at the Top 10 electric scooters for kids and teens!

Sure, you could buy a car. But do you really want to deal with END_OF_DOCUMENT_TOKEN_TO_BE_REPLACED

A few years ago when electric scooters first starting appearing, people wondered whether this END_OF_DOCUMENT_TOKEN_TO_BE_REPLACED

Top 10 Foldable Electric Scooter with Seat for Adults in UK!

In just a few years, electric scooters have quickly grown in popularity in many END_OF_DOCUMENT_TOKEN_TO_BE_REPLACED

Has the Covid-19 pandemic killed the electric scooter market?Most micromobility startups have struggled to END_OF_DOCUMENT_TOKEN_TO_BE_REPLACED