The E45E is the new electric scooter model from Segway Ninebot. It is a top-tier electric scooter in the E-range. Segway Ninebot commuter e-scooters are very popular but every scooter has their upsides and downsides. What many customers want from electric commuter scooters is better battery life. Often times the battery is the weak link in the chain but the Ninebot E45E is an exception because this electric scooter comes with extra battery.

For many people this is very important, especially for those who commute with their electric scooters regularly for long distances. Ninebot commuter scooters are also known for their ride quality, comfort and portability.

Hopefully this review of the Ninebot E45E will give you a pretty good idea whether this electric scooter with extra battery is for you. New and updated models of electric scooters come out all the time and this gives customers more choices to choose from. 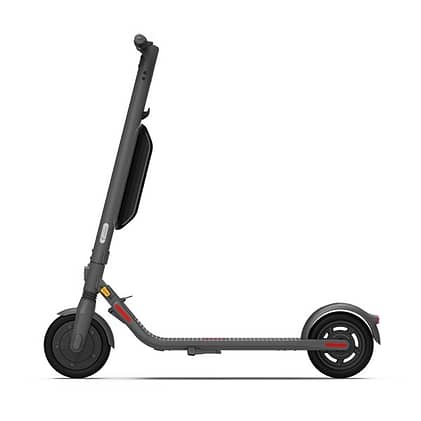 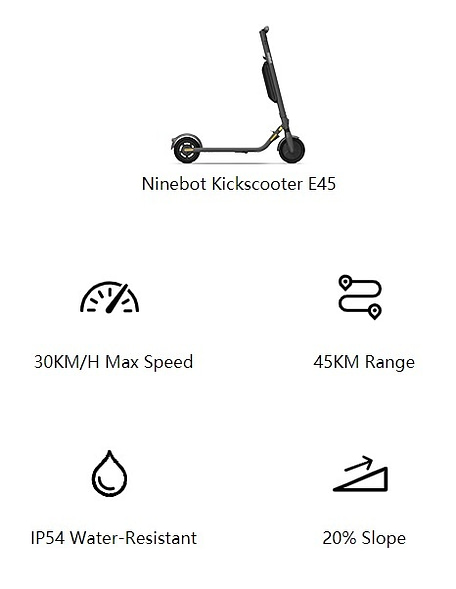 The E45E features an additional pre-installed battery pack with a total capacity of 368Wh and has a total claimed range of 45km (28mi).The extra battery unit is mounted to the stem. This extra battery is really useful because it means you don't have to charge as often, especially considering it takes 7.5 hours to fully charge the battery. 45 km of range is around 15 km more than the range of the Xiaomi 1S for example.

The Ninebot E45E boasts a 300 watt motor with a top speed of 15.5 mph. This is pretty much standard watts and speed for a commuter electric scooter. The speed limit in many places is 15 mph anyway so there is really no need for a faster commuter scooters.

The E45E is capable of climbing an incline of up to 20% without much difficulties at a maximum speed of 25 km/h and with a maximum payload of 100 kg-s. This is mainly due to the 300 watt motor, which is 50 watts more than the Xiaomi 1S has.

You can also choose from 3 different riding modes: Eco, Standard, Sport. The Eco mode has the longest range but least amount of power, while the Sport mode uses up more battery but has more power.

The ride quality of the Ninebot E45E is excellent thanks to the 9” non-pneumatic tyres filled with foam, which are an equivalent to 40 psi pneumatic tyres. These large 9-inch puncture proof tires along with cruise control and the front shock absorbers make riding the scooter very smooth and comfortable.

The 3 independant brakes also greatly improve ride safety and quality. The E45E features electronic & regenerative front brake, foot brake and magnetic brake. You can choose yourself which type of braking you prefer to use.

Also a press bell is included, which allows you to alert pedestrians and other riders. Another very useful safety feature is the rear mudguard that protects you from splashes in case of a rain shower. The IPX4 water resistance rating means that you can ride in light rain but should avoid big puddles of water.

Having quality lights and reflectors are very important for a commuter electric scooter and the E45E really shines in this department. It has 2.5W high power front light, as well as  rear and brake lights. The brake light in the rear flashes when braking. The lights are E-mark certified (the European requirement for lights on vehicles to conform to performance standards).

The E45E also comes with ambient lights under foot board that can be adjusted via Segway-Ninebot App. The E45E is equipped with front, side and rear E MARK certified reflectors as well. Most scooters don't come with reflectors but in low light conditions it is really vital to have reflectors to stay safe.

This electric scooter with extra battery is very similar to other commuter scooter in terms of the weight, folding mechanism and weight limit of the scooter. The weight of the scooter is 16.5 kg or 36 pounds, which is 4 kg more than the Xiaomi 1S. This is quite a bit more, which makes it less portable but you need to make some compromises for the extra battery.

The E45E has a hands-free quick and compact folding mechanism which is expected from a modern commuter e-scooter. The 100 kg weight limit is standard as well although it could be a little higher to accommodate heavier riders.

The LED dashboard of the E45E shows important information, such as speed, , remaining battery, speed mode and maintenance. The scooter has a Bluetooth connection as well.

But the E45E has some drawbacks,such as the 36 pound scooter weight, which is more than other similar scooters. The IPX4 water resistance is good but IPX5 and IPX6 would be better. And the 100 kg weight limit could also be higher.

Order The E45E at Pure Electric

Sure, you could buy a car. But do you really want to deal with END_OF_DOCUMENT_TOKEN_TO_BE_REPLACED

A few years ago when electric scooters first starting appearing, people wondered whether this END_OF_DOCUMENT_TOKEN_TO_BE_REPLACED

Top 10 Foldable Electric Scooter with Seat for Adults in UK!

In just a few years, electric scooters have quickly grown in popularity in many END_OF_DOCUMENT_TOKEN_TO_BE_REPLACED

Has the Covid-19 pandemic killed the electric scooter market?Most micromobility startups have struggled to END_OF_DOCUMENT_TOKEN_TO_BE_REPLACED