The pandemic that hit us during  2020 and 2021 has made us reevaluate transportation, especially in cities and towns where people mostly rely on mass transportation to get around. 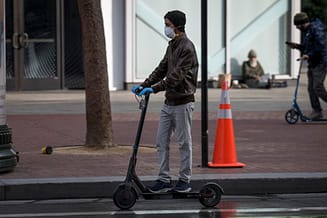 Electric scooters, skates and skateboards, which were underpowered kids’ toys just a few years ago, have been quickly transformed into a convenient and efficient mode of transport for many. Electric scooters have become especially popular among college students and  18-34-year-old urbanites.

Electric scooters started to appear practically overnight on the streets of many cities back in 2010. Although for some these personal transportation devices (PTD) seem childlike in terms of their appearance, these dockless PTD-s don’t have a fixed home location and can therefore be picked up from arbitrary locations. Shared electric scooters quickly overtook bike shares that were station-based and also established micro-mobility as a legit but somewhat controversial mode of transport.

When the coronavirus was announced as a worldwide pandemic by the WHO on March 11, 2020, and countries around the world went to lockdown, travel stopped as well. But not everyone had the ability to stay at home and these essential workers still needed to get around somehow.

During the spread of the virus, mass transportation hit all-time lows as people stopped using trains, buses and subways to avoid being in close contact with other people. Many other systems reduced their routes and services, forcing people who couldn’t work from home to look for other commuting options.

A large portion of those people started to use micro-mobility. For example in New York, the bikeshare rides went up by 67% in the middle of March, when compared to the same period in 2019. Also during the first 2 weeks of March, bike check-outs on Chicago’s Divvy program doubled, when compared to the same period last year. But when the lockdowns started to take effect, micromobility use also dropped and many systems were shut down.

When cities started to reopen, PTD providers were hopeful that the need for social distancing would result in a greater demand for micromobility services. An American study from April 2020 found that of those people who would regularly ride mass transit, 28% of them would use it less often and 20% of them would not use them at all.

In May 2020, micro-mobility providers in Washington DC, Oklahoma City and Columbus, were reporting that the length of electric scooter rides was increasing. This means that people would use their PTD for full commutes rather than for the first mile, last mile trips, as was the case pre-pandemic.

Also in July 2020, Chicago officials announced that they partnered with 3 electric scooter vendors, in order to conduct another 4 month’s pilot program, which would make 10,000 electric scooter available throughout Chicago.

The usage of Personal Transportation Devices goes beyond just rental e-scooters, as sale of e-bikes saw a surge during the pandemic, as one retailer in New York City recorded sales of 600% when compared to the same period the previous year.  A study, which was recently commissioned by Deloitte predicted use of e-bikes worldwide will grow 50 percent by 2023. 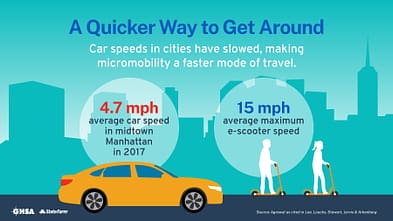 The majority of electric bikes can travel at least 25 miles, depending on how much assisted electric power a person uses. E-bikes can also be very useful for hauling gear and transporting packages and food o people. For example, in March 2020 New York City’s comptroller released a report encouraging the city to subsidize the purchase of e-bikes for frontline workers in order to hasten their travel time.

In some of the places during the lockdown, cities closed streets for cars and opened the streets for only electric scooters, e-bikes, pedal bikes, and pedestrians. The first city to do this was Oakland, CA which launched the Slow Streets program on April 11 2020. By June 2020, more than 20 miles of slow streets had been installed along 19 corridors throughout Oakland.

Seattle was also one of the cities that closed 20 miles of roads, which were named “Stay Healthy Streets.” These roads had low car ownership, low rates, limited open space and were along routes for essential services, such as takeout meals. I

n May 2020 these temporary closures become permanent, which made Seattle the first city to put these measures into effect. Seattle is also leading the way of accelerating the efforts to install the necessary infrastructure for biking, such as protected bike lanes and greenways. Many micro-mobility providers and PTD owners have urged other cities to follow these examples as well.

There have been a total of 207 million trips on e-scooters, e-bikes and pedal-powered bikes in the United States since 2010. 84 million of those 207 million trips occurred in 2018. Although data for 2019 and 2020 are not available the numbers are expected to be much higher when compared to 2018. The 84 million trips of 2018 included 9 million on dockless bikes, 38.5 million on electric scooters and 36.5 million on station-based bike share, according to the National Association of City Transportation Officials

Electric scooters become the most popular micro-mobility mode as the preferred vehicle for dockless providers by overtaking bikes. There were also a total of 85,000 electric scooters operating in almost 100 cities across the United States by the end of 2018. 40% of all the electric scooter trips were concentrated to three metropolitan areas: Austin, Sand Diego and Los Angeles in 2018.

As the travel speeds of cars have become slower, PTD has become a faster alternative. For example, in midtown Manhattan, cars traveled at an average speed of 4.7 mph, which is practically a walking pace and a very slow way to get around.

Shared electric scooters and bikes have a maximum speed of 15-20 mph, which makes them a faster alternative to cars. Travel speed is one of the most important factors for riders. 62% of people in the Danish capital of Copenhagen bike to school or work. 49% of those people said that the main reason for using bikes for commuting was because it was faster. So the primary reason was not for health reasons or because of saving the environment.

When using cars for commuting you also have to deal with parking and gridlock. Electric scooters and bikes take up much less space and there is no need to look for parking space or pay for using it. Modern electric scooters are light and foldable, allowing you to fold the scooter and store it in your office or home.

Another benefit of using electric scooters and bikes is that they allow you to get to your destination without exerting yourself. Pedal bikes require you to do all the work but electric scooters and bikes require less or no output from the rider. Electric bikes can be especially beneficial for older adults who have limited mobility, as the person can choose how much to pedal.

It might seem that using electric-powered bikes is cheating but it actually is not because people who use e-bikes get more exercise because they ride more often and for longer distances. If someone has an e-bike in their home then they might opt for using their electric bike for small errands rather than their car.

Electric scooters, unlike electric bikes, require a little more physical prowess to use, which is why there are a variety of e-scooters for accommodating all comfort levels and body types. Micro-mobility providers Shared and Razor in Portland, OR offer electric scooters with seats who have disabilities. These electric seated scooters have also wider wheels and larger tires than most stand-up scooters.